Tuesday morning we inspect the two flats we did not see Saturday morning.

Both King Edward and Nugget passed with flying colours.  Elder George was transferred to Motherwell and will replace Elder Wilde who went to Mdsante.

We told him that the Motherwell elders have a beautiful flat with a loft in a resort community called Bluewater Bay.

The plan to transfer four missionaries assigned to Kenya here has fallen through.  Evidently the mission office was successful in securing temporary visas for them.  President Wood approved the rental of a second flat in Bluewater Bay as he expects to send another set of missionaries there as soon as possible.

I got in trouble when we bought the new window and installed it without the landlord's permission.  It was broken by elders a year ago but not replaced until Elder Swacina complained to us about it being cold.  The landlord was annoyed.  He did not want me paining, hanging new curtains and fixing things up without his permission. But the window was large enough for someone to climb through and rip them off.  It was a security issue and our job is to see that these young men are warm and safe.


Sister Stokoe,
I wish I could have read all your progress letters. Thanks so much for this. I have trying to work through the Zone Leaders on the Flat Cleanups as the Flats are pretty bad, and I am have great luck with this plan. I have found that Flats, long established can have terrible situations. Your inspections are needed. We are getting better at it but not good enough, still some real disappointments out there. Thanks again for your note and pictures.
Elder France


I discussed the leaky roof with in their flat with Ken Farie.  Immediately he sent one of his workers to make repairs.  Now all five flats that we inspect are clean and in good condition.

Will you assist the Elders in purchasing new bicycles? Is there an place to purchase bikes in that area? Goodmorning.

The damaged bicycle is being held as court evidence.  The Cleary Branch car elders told me this morning the 2 bikes they have are in Cleary; that they drive their car to Cleary, park it, and ride the bikes to save petrol and kilometers.  So those bikes are not available. The bicycle-less elders get dropped off in the nearby township by the Zone Leaders and walk. 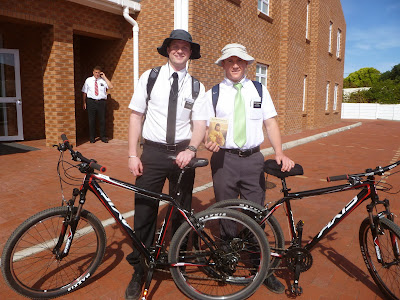