Mom/Dad
Thanks for keeping us up date with the work in the mission field. We attended Seth's funeral this weekend. I was asked by several members of the 3rd ward how you guys were doing and they wished you well. Although sad, it was a good experience spending time with the family.

Neil and I went over to Steve's grave after the dedication of Seth's grave.   We had a very special moment together and felt Steve's spirit close. It felt like a small gift from God. Thanks for all you have done over the years and for your example to my kids. We look forward to seeing you in the fall and wish you the best!   Love, Dave
---

While our sons represented us at Seth's funeral we continued our assignment by attending a baptism on Saturday:

Syabonga Willie is a single man who lives in Native Unit #2 and attends Motherwell Group.  The two ladies, Zwide & Kholiwe Zitshu attend Kwa Magxaki Ward.  Until Motherwell becomes a branch we are all in that ward.  We understand that our Group Leader has applied for Branch Status and we hope that Salt Lake approves his request before our Exit interview with President Wood in Cape Town Oct. 15th.  Then Motherwell will have a branch presidency and qualify for their own budget.

We gave Brother Zitsu two collages of photos which we took during "Helping Hands" last Saturday--one for Motherwell and the other for Mrs. Peter, the principal of Elufefeni Primary School where our group meets.

Every seat was filled as 60+ people attended Sacrament meeting today.  I gave a talk on Reverence.   The school's assembly hall is sorely needed for our Sacrament meetings.  Hopefully Mrs. Peter will be open to allowing us to rent that room in addition to the four class rooms which we currently occupy. 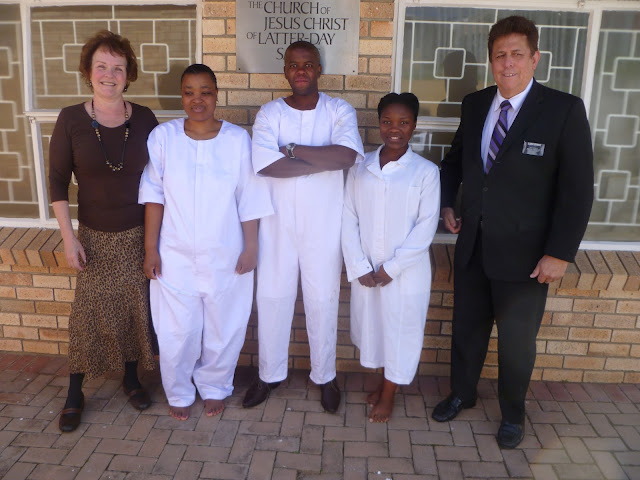