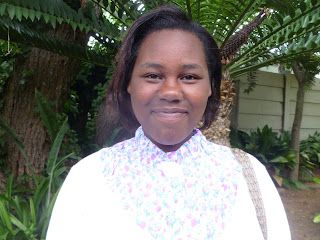 We are very busy with PEF work and so travel back and forth between Grahamstown and Port Elizabeth at least once each week.  We returned to Grahamstown on Saturday to attend the baptism of Miliswa Mapapu in the branch swimming pool.    It was a very hot day.  Miliswa, her father and little brother had walked from the township which took them about 45 minutes to get to our building on Bennett Street.  As Miliswa is a minor she had to wait for permission from her parents before she could enter the waters of baptism.  The elders have been teaching her for some time and Miliswa has been attending church regularly. 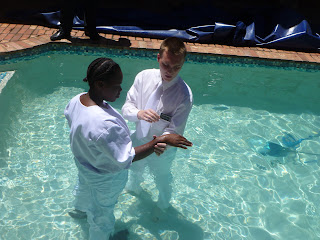 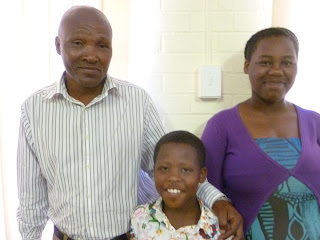 Aya conducted the meeting and Elder Khumalo spoke on the importance of baptism by immersion by one who has authority.  Elder Swenson talked on the importance of the Holy Ghost.   Miliswa was confirmed and welcomed into the branch the the next day, Feb. 3rd, by President Badaza.   While driving back to our flat, Elder Stokoe and I noticed Miliswa and her father walking home to the township.  Her father had his suit coat up over his head for protection against the hot summer African sun.  So we offered them a ride. 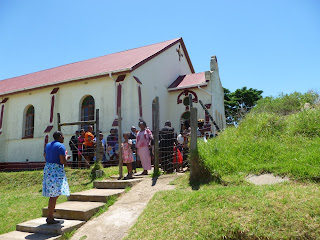 The family lives just around the corner from “Church Street,”  where ten other Christian denominations have buildings.  As our branch is across the valley in an upscale neighbourhood, it takes most members an hour and a half to walk to and from the building each time they attend a meeting or activity.   Obviously it would be much easier for them to simply attend churches in their own neighborhoods.  What commitment and dedication the people demonstrate.   What sacrifices they make.  They are so humble and teachable.  They are an inspiration to us North Americans.

We have been driving the new branch president and wife home from various meetings.  He does not have a car.  Often the meetings go late into the night.  Kaya, the first counsellor, rides his bike.  Solomon Johnson, the second counsellor,  lives in town. He is the only member of the presidency that owns a car. If we had more Melchidezek priesthood holders in the branch we would qualify to become a ward and be eligible for our own building.  However, there are only two active married couples in the branch and not many priesthood holders.  Our four Grahamstown missionaries  keep things moving along.  Aya has been helping the missionaries but he leaves for his mission in Johannesburg Feb. 20th.  Bulewa, his twin sister, is also preparing to serve a mission.  Which will make 6 missionaries for little Grahamstown Branch.  The church covers all their expenses when they are in the field but each must pay for his own passport, clothes, medical exams and any other expenses they incur before entering the MTC.

Our membership now numbers 135.   We usually have about 30 members and/or investigators attending each Sacrament meeting.    There are many less actives on record; some for a very good reason, they have to work.  For others, it's a matter of choice.  A few have returned to their former churches.  In March we are having a “Finding the lost Sheep” activity.  We will go out to the townships and look for people of record who never attend.
Posted by Diane Stokoe at 4:05 AM