I got up at 6:00 a.m. on Sunday morning to go over my two lessons.  We arrive at Port Elizabeth Ward at 8:00 for Sacrament Meeting.  Brother Meyer caught us on the way out to ask if we would have Elder Zitsu announce the Young Adult Fireside at Kwanobushle for the young adults of the stake.   I assembled my Institute students in the foyer and had Elder Stokoe take this photo which I sent to them today to remind them that Institute will be held this Wednesday but not the following week as we will be in Grahamstown. 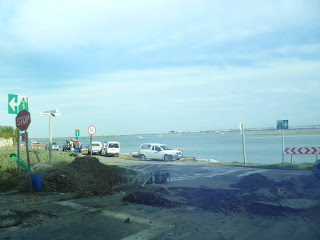 We had just enough time between the meetings to drive out to Blue Water Bay, a resort community with lots of boating and fishing, where our Motherwell elder's stay.  They live in a nice flat with a loft which they keep clean and orderly.   Missionary flats are always located in secure areas and not in the townships.


At 3:00 we returned to Motherwell to collect three young adults.  These people are so new in the gospel that it's fun to be around them and to answer their questions.  Sister Buzelwa asked if it's okay to "love a missionary."  I think she has a crush on Elder De Carvalho from Sierra Leone.  He has been in Motherwell since the area opened in February.

I explained that the Elders are committed to serve God for two years. and they may not have any romantic attachments.  It distracts from the work.  If one became "too friendly with the natives" President Wood would initiate an E.T. -- emergency transfer to some other area.  So it's best not to become emotionally involved with any elder.  After the mission is over the missionary is released.  He is then encouraged to get a job, find a wife and marry in the temple.

At 3:00 we returned to the school to collect our young adults.  These young people are so new in the church that it's fun to be with them and answer their questions.  Sister Buzelwa asked if it's okay to "love a missionary."  I'm thinking  she must have a crush on Elder De Carvalho from Sierra Leone who has been in Motherwell since February when the first elders where sent to Motherwell.

I explained that missionaries are committed to serving God for a full two years.  If they get to be "too friendly with the natives" President Wood will initiate an E.T. --  emergency transfer.  Elders may not have any romantic attachments while serving.  After their release an elder become "fair game" and is encouraged to find a young woman to take to the temple.

Nineteen year old Sifundiso Beja, (forefront in last photo) has attended Motherwell Group since March.  As a member of his school's rugby team, he along with his fellow players was on the beach a year ago when a huge wave swept everyone out to sea.  Six of his team mates drowned.  I asked Sifundiso if any whites were drowned.  He said that two survived as they were able to tread water until they were rescued.  Blacks never learn to swim.  It's dangerous for them to be in the water.  It was a miracle that Sifundiso survived.  He promised God that he would make the best of his life as he was saved.  He goes out with the missionaries working as a "fellow shipper."  Sifundiso often joins us as a translator when we visit the Xhosa speaking members.

Monday - P Day.  I was happy to have some down time.  Elder Stokoe spent the day driving Michael Touis around in an effort to find him a welding job.  He also visited Charlene's nursing school and resolved the same problem that she ran into before.  They wanted 160 rand in addition to the 3,000 PEF had already paid in order to allow her to take her final exam tomorrow.  Last night we talked to one PEF applicant who was not able to apply for a loan as his birthday was incorrect on the church records.  That problem has since been resolved.  So evidently of the 18 we graduated from "Planning for Success" classes since March, at least one will be applying for a loan.
Posted by Diane Stokoe at 11:22 AM