1.  East London - Brother and Sister Fowers – Recent service project was to cover a dirt floor with cow dung and use dung mixed with clay to fill in holes in the walls & roof.  They let it dry and then paint over everything.  They participated in another activity to line the walls of a one room shack with cardboard.  The woman was most appreciative.  Maxiulie is a youth and recent convert preparing to serve a mission.  He lives in a one room shack with his mother.  It has no stove nor running water.  Sister Fowers is helping him earn money for his pass port and he is blossoming.  She has taught him to make muffins in her oven to sell to his friends and others.  She provides the chocolate chips and all the other ingredients.

2.  Grahamstown - Brother and Sister Nye a senior couple from Oklahoma.  She is a former elementary school principal.  Recently here children collected books and school supplies, brought them here and donated them to a needy school.  She said three women administrators came from the district office wearing diamond rings and lots of gold bracelets.  (See newspaper article in blog.) Everyone deferred to them.  Parents and students were all very appreciative.  Mothers danced around with the boxes on their head.  Brother Nye is former bishop who believes the Xhosha should give up their tribal traditions including circumcism. I disagreed citing Nelson Mandela, a Xhosha, who counts his years as a man from the date of his circumcise ceremony.  I pointed out that Xhosa men cannot marry, inherit property or become tribal leaders if they have not gone through this ceremony.  Van Sickel described how the young men in his ward arrived to greet others who had just completed their initiation activities.  He said there was none of the traditional drinking when the Mormons came to participate. Young men are taught to be good Christians as part of the ceremony.  Also the Xhosha did not want to offend their Mormon guests.The Nye’s will sponsor a Fireside on a Saturday afternoon between 2:00 and 3:00 p.m.  However there are no immediate  PEF applicants.  Area historian Alan Banford, a member who will show us around when we come.  We will see the 100 year old cathedral in Grahamstown.

3.  Port Alfred - Elder & Sister Stems will replace the Robinsons who are leaving in May.   Brother Robinson is the branch president.  They live in a beautiful apartment overlooking the ocean where they can see whales.  Port Alfred is a black community comprised of about 50,000 people.  This is an area of vacation and retirement homes.  Unemployment among LDS members is a huge problem.  There are jobs for domestics and gardners.  There are 55 members in their branch.  Many are in need of food and employment.  They are open to scheduling a PEF fireside.

4.  George - We met Elder & Sister Richins in the MTC and arrived in Africa with them.  They replaced the Smiths who were transferred to Nimibia.  We have scheduled a fireside at Knysna at 4:30 on Sunday, April 22nd.  We will join them in catering the Zone Conference luncheon for the young elders and President Wood on  April 5th.  Shortly thereafter the fireside at Knysna was cancelled.  So we scheduled one at Kwa Magxaik in the P.E. Stake for that day.

5.  Kwa Nobuhie Ward, P.E.  - The Van Sickels -- Employment Specialists --do not seem to be doing much with Employment but instead have adopted Bishop Mahaloubai’s ward of 698 black members.  There is 25% unemployment here in South Africa.  Evidently Van Sickel hoped to serve in the churches’s humanitarian department developing water projects since he owns an installation company.  Shortly after he arrived he proposed a project in Illigandy to improve their water delivery system.  Illigandy is a former determent camp. The  four wells drilled there in 1987 are failing and the old pipes need to be incased in copper or they will eventually collapse.  As the water level drops, the township only get’s water two hours a day.  Van Sickel offered to fund this project himself if the church would agree to do the legal work for him and the residents pay a tiny fee to keep things going.  Johannesburg declined saying that those people already had water, they missed the application deadline and areas have no running water at all.  Van Sickel claims that leaders in Johannesburg did not understand his proposal.  He is a nice man but  not a good communicator.   I asked if he had written up his proposal?  He said “No but I've sent pictures.”  My feeling is that this is a worthy project that needs a good  advocate. 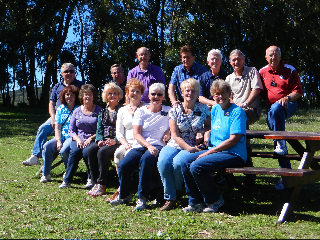 6.  Port Elizabeth Area seminary and institute missionaries - Elder and Sister Taylor are very busy assisting and teaching classes.  They just finished showing the "Ten Commandments" to the  institute students.  After which they served refreshments and held some discussions.  They are also mentoring a young widow with two children on Monday evenings to help her become a more effective institute teacher.

7.  Zone PEF Coordinators.  Elder Stokoe and I will set up Fire Sides with these couples and our priesthood leaders and workshop teachers in the Port Elizabeth Stake.  The Firesides cannot begin until mid April when second  terms begins and students return from holiday.  These Firesides must be concluded by June 22nd in order to give the applicants enough time for their applications to be processed and the money dispersed to colleges and trade schools for their tuition before the beginning of the next school year in 2013.