Tom is on the phone with the Tises. She started nursing school yesterday. Now she needs some vaccinations. Tom is saying that he will pick her up, drive her to the pharmacy and pay for them. The school called 3 times last week to say they had not received her tuition. We have proof that 3,000 rand was transferred into their account on Feb. 26th. There is lots of corruption here in S.A.   It takes a full time senior couple to navigate through these problems.  So far we have managed to stay busy.

Went to Sea View Game Reserve while Jessica cleaned our flat on Thursday.  We attended District Meeting on Friday, shopped and then went to a "Planning for Success" class at Uithengage at 5:00 p.m.  When we got  home I made a carrot cake for the missionaries. The next morning I put a ham in the oven and we began inspecting flats at 8:00 a.m.  We finished in time to shop for their supplies and the other items they needed and then made it to the church for Institute training at 10:00 a.m.

We picked up some Kentucky Fried chicken on the way home and I put the potatoes in the oven to bake. I made a tossed green salad while Tom set the table. Our missionaries began arriving at 12:45. It had been raining hard for the last several days.  Since many people were out of town for the holiday,  they were happy to attend this activity. Several asked what we were serving while we were inspecting the flats. Our two Cleary Elders said they hoped it would not be pickled fish. They had their fill at dinner appointments in the colored areas on Good Friday.  The Elders cleaned everything up, including the rolls I bought for the Senior Couple dinner I hosted on Sunday. We gave each Elder a huge chocolate bar and then we watched "Joseph and the Amazing Technicolor Dream Coat." We took photos with everyone's cameras.  They all left at 3:00 as some had evening appointments.   Sister Rank invited Elder Stokoe and I to dinner at her house that evening.  The Lorraine Elder, Strauss and Slabbert, were also included. 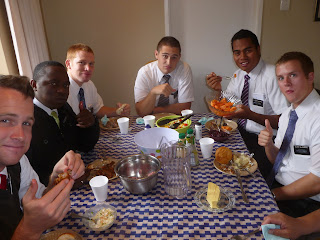 On Sunday we attended both Port Elizabeth and Lorraine Wards and announced that anyone interested in a PEF loan, please meet with us in the back of the chapel after Sacrament meeting.  We had several stop by but had to tell them that these loans were only for young people between the ages of 18 & 30. We found a woman in each ward eligible and took down their contact information.

We came home and made dinner for the other two senior couples here. I grilled salmon and Tom cooked the stakes. The Sherberts brought a tossed salad and the Van Sickles brought root bear and ice cream for floats. It was nice to get together as we usually only run into them in the outlying wards.  I started this tradition last September when the Taylors left.   Up until then, we got together only on birthdays.

The Van Sickles work in the Townships and had some amazing stories to share about bride price. They mentioned that one of our PEF students was going to East London this weekend to collect his bride. Evidently all cows that they had agreed on were not delivered at the time of the ceremony so the brides family insisted that she remain with them until the contract was fulfilled.  They had married six months earlier.   I asked why she did not just "walk away and join her new husband."  They explained that this had to do with tradition and respect.

We drove to Grahamstown on Monday to meet the Chases. They were happy to see us and Sister Chase prepared an Indian dinner for us. She loves to cook and has been making cookies for the elders and members since she arrived.  They have many fears and concerns about living in Africa. There is always a period of adjustment.  She seems overly concerned about crime, clean water, and bugs. Unfortunately they were without running water for three days and had to carry water from a tank.  The Stumms were without water in Port Alfred for 21 days last spring.  We only experienced a couple of electrical outages during the three months we served in Grahamstown.

We also visited Alan Bamford.  He gave us several DVD's from his collection so now we have something to watch besides the nightly news. We have already watched Ghandi & Pretty Woman.  Last night Tom watched Gladiator for the second time after we came home from a "Planning for Success" class at Kwanobuthle. Eight students showed up for the first class.  I hope they all complete the program and a few actually apply.  Tonight I'm teaching Chapters, 12, 13 & 14 at Institute. I'm reading Voices of Hope, Latter-day Perspective on Same-Gender Attraction— which was compiled by Ty Mnsfield.  One of my students gave me the book to read.

P.S. All five Institute students showed up.  Sister Sherbert sat in on the class as our husbands were asked by President Neku to attend a special meeting between 6:00 and 9:00.   All participated and Sister S. complimented me on the lesson.  We are really looking forward to Conference.  There is an eight hour time difference but still, some of the sessions will be broadcast live.
Posted by Diane Stokoe at 11:21 AM